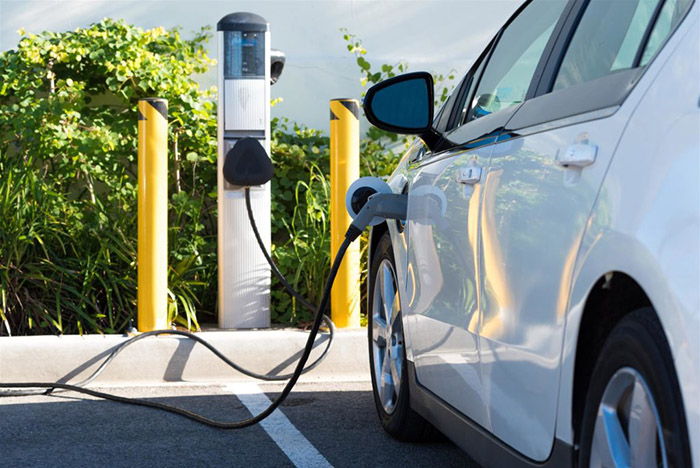 Jyoti Parikh, Executive Director, Integrated Research and Action for Development (IRADe)
The budget can recognize demands arising out of the need for climate action through GST tax rates rather than subsidies 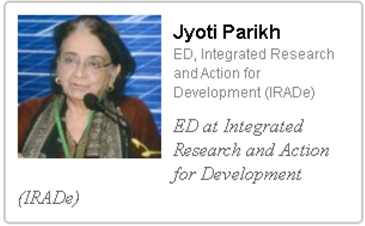 28th January, 2020: Recent meetings at Davos and Madrid focused on climate change and raised concerns about inadequate climate action. Basically, we are talking about reducing the use of fossil fuels viz; coal, oil and gas for climate mitigation. However, considering that the world has done so little so far, there are climate impacts that need to be countered such as disasters, extreme heat and cold, etc. through climate adaptation. This brings us to the question on what can the budget do towards this cause?

India already has climate friendly policies in the power sector which promote renewable energy and energy efficiency. However, much more can be done to increase the pace. For example, what measures can be taken in the transport sector, which is the major user of petroleum products in India? Here we have triple pressing concerns: large-scale imports of fossil fuels draining our foreign exchange resources; air pollution; and climate change. All the three above concerns can be addressed by promotion of Electric Vehicles (EV) – a remedy to address noise pollution as well.

Unfortunately, the Government program for Faster Adoption and Manufacturing of E-vehicles (FAME), launched to promote EVs,basically depends upon providing subsidies for a few vehicles. It will be difficult and even undesirable to upscale FAME, which relies on subsidies to manufacturers for sold vehicles. In the name of demand mobilization, it does the opposite. It providessubsidies to manufacturers –e.g. INR 1.5 Lakh per car for only 35000 cars. What manufacturers really need is high demand for EVs to upscale production. On the other hand, this amount of INR 1.5 lakh is a lot for the car purchasers. However, even that would be unworkable for millions of consumers. So how should this be addressed?

In any new technology, there is the ‘chicken- and -egg’ problem, viz the demand does not increase because the price is too high and price cannot drop unless there is high demand. To break this logjam, it is easier to play around with GST rather than subsidy. Also, it may be easier to reduce GST, at least initially. Firstly, manufacturers may not pass the full subsidy received by them to consumers. Also, the allocated funds are limited to a small number of vehicles that may be provided subsidy. Moreover, it requires bureaucratic interventions to monitor and transfer funds to the manufacturers. Instead, the Budget can give tax relief directly to consumers, producers as well as to the providers of charging infrastructure. Recently, the GST for e-vehicles was reducedfrom 12 % to 5 %. This can be extended to zero % as well. Lower GST can reduce the price for a consumer to the same extent without any bureaucratic intervention. It will not require setting aside funds in the budget, where other compelling demands compete. So if EVs take off, more than 35000 can be absorbed. Of course, it will reduce GST revenue. This will stress the budget only if sales exceed 35000. The manufacturers should also be provided tax benefits initially instead of subsidy, so they reduce costs and are incentivized to produce better vehicles in abundance. More varieties of EV vehicles are needed for consumers to make choices and purchase them in large numbers, stressing the budget if the sales exceed 35000.

Other measures the Budget can look at, is to incentivize scrapping of old vehicles to save fossil fuel consumption, air pollution and CO2 emissions. It is also another way to promote demand. Emphasis should be given to promoting electric two wheelersas the annual production of 2 wheelers is about 21 million, as compared to 4 million cars. Charging is also simpler for 2 wheelers. Similarly, EV buses are also very important for all three benefits quoted above. We need to provide an affordable and comfortable transport system which people prefer over driving a car, finding parking for it and maintaining it.

Charging infrastructure will remain a risky business for a while because not enough is known about charging behaviour yet. When, where and how many consumers will come with what type of vehicles will be clearer only as the demand picks up. The incentives they need are non-monetary, such as providing a place and other facilities. Thus an appropriate program will benefit the environment, the nation, the consumers and producers. It would require incentivising EV but also taxing conventional vehicles after some period of time when sufficient EV options are available. A word of caution is required here – taxing fossil fuel based vehicles more than EVs work better only if good choices of EVs are available. Currently, we have not reached that stage yet. Aggressive thrust on EV helps climate mitigation which reduces the use of fossil fuels.
We also need to worry about climate adaptation to deal with extreme weather events and disasters. Spring and summer are just around the corner. It is no longer possible even for the poor and lower middle class to live without fans and coolers or cool roof over their head in congested urban slums. The Cooling Action Plan launched by the NitiAayog needs to be taken up to design appropriate tax incentives and subsidies so that people go for energy-saving or super-efficient cooling devices. We recall what we did to when the cost of LED bulbs was brought down by mass procurement. Similar programme for cooling devices is needed so that the increase in electricity demand is manageable.

Thus, the budget can recognize demands arising out of the need for climate action through GST tax rates rather than subsidies for energy efficient appliances so as to give long term signals for green growth.

(This opinion piece was published on ETEnergyWorld.com on January 28, 2020. https://energy.economictimes.indiatimes.com/energy-speak/budget-suggestions-for-climate-action/4012)