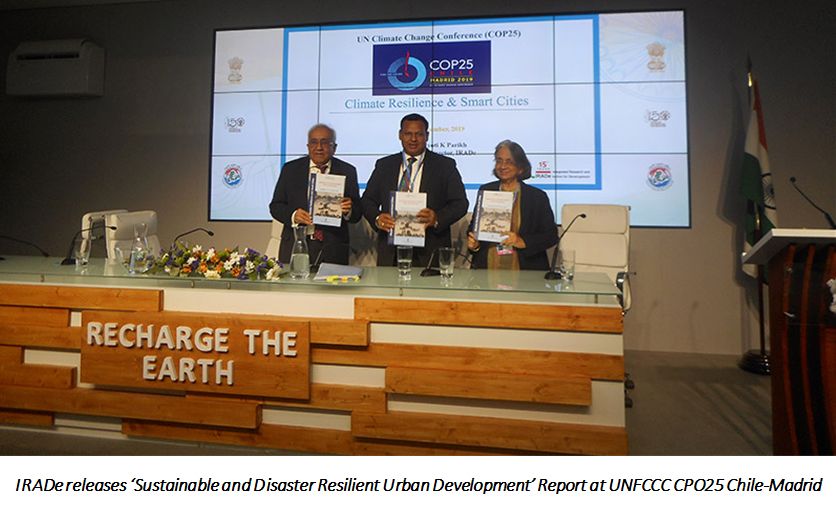 Dr. Jyoti Parik, Dr. Kirit Parikh and Dr. Probal Ghosh represented IRADe at the COP 25 held at Madrid, Spain from 4th to 10th Dec, 2019. COP 25 was the last COP before the Paris agreement came into action and hence was significant. Many climate researchers and activists attended the COP 25 at Madrid and presented their views through their research. IRADe also presented its substantial research at the India pavilion and the Capacity building hub on the Knowledge to Action Day. IRADe’s presentation at the India Pavilion was on “Climate Adaptation Action: Climate Resilience and Smart Cities” on 5th Dec covering the work IRADe did in the area of urban climate resilience efforts for cities towards Disaster Resilience, Heat Stress Action Plans and countering vector-borne diseases like Dengue. The analysis presented covered the geospatial analysis of 15 Indian cities and the engagement with Urban Local Bodies to frame adaptation strategies, knowledge products, capacity building and enriched the dialogue by a considerable amount of stakeholder engagement.

The presentation at the Capacity Building hub on the Knowledge to Action Day was on“Mobilizing stakeholders at subnational levels”. The capacity building hub is organized by the Paris committee on Capacity building of the UNFCCC. There were 11 thematic days on which presentations were invited by various researchers and research groups. IRADe presentation was on 6th Dec on the Knowledge to Action day. IRADe presented its experience of it projects in which it converted knowledge to action through policy changes for adaptation such as setting up heat wave action plans for cities like Rajkot, Dengue, disaster resilience of cities, climate change awareness program etc. and NDC formulation and implementation, diesel price subsidy reforms and rationalization for mitigation.

A number of issues got discussed across stalls which were of Interest. Some of the recurring issues that were being talked of was that the NDCs announced by countries for their Paris pledge were inadequate and would lead the world into a path of 30 C above pre industrial levels and it would require a reduction of 16% to reach the target of 20 C and a reduction of 32% to reach 1.50 C above pre industrial levels. Interestingly very few countries have their NDCs that comply to 20 C target. India is one of them including Costa Rica. A case was being made for countries to ratchet up their NDC commitments. Number of presentations were on enhancing ambitions for NDC commitments.

Additionally, many sessions were organized on NDC partnerships focusing on how to get the NDCs implemented on the ground in many of the developing countries like Latin America and Africa. There was talk and discussion about carbon tax as an instrument for mitigation. The developed countries including China submitted a draft paper on loss and damage to the developed countries.